Born in Yallourn, Victoria, Australia at a very early age. Studied classical piano from 9 years old until 14 when I quit. A few months later, someone played a Nat King Cole Trio record for me and I was hooked for life ! Talk about enthusiasm ! Practice of 6 – 8 hours daily in addition to having a full time job with the Electricity Commission built up a stamina for playing I’m still benefitting from today after 60 + years of playing.

My other long term passion in life has been aviation which fascinated me from about 10 years old.  Had to check out each aircraft which flew over our town and soon learned to recognise all types. As a small boy I went to our local aero club, refuelled, cleaned windscreens and as a reward was given many delightful open cockpit flights.

Music was the greater passion so I concentrated on that and ignored flying until my 39th birthday when the decision was taken to learn to fly. The Commercial Pilot’s Licence was earned and a Seaplane endorsement followed soon after. During the next few years, I operated on the East coast of Australia from Cairns in North Queensland to Strahan in Tasmania – I flew by day and played by night, and saw some remarkable places. In what seemed moments, 20 years had passed and it was time to hang up the headset for good and get back to concentrating on my music. 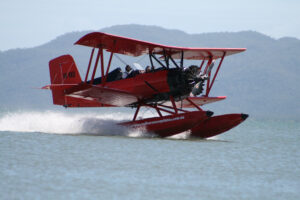 Among the photos on my Facebook page   www.facebook.com/Webfoot06
you’ll find more of the open cockpit seaplane in which I spent 8 happy years. In recent years the music industry has been great and our trio of Peter, Warren and I formed  in 1990 for all types of gigs, concentrating on playing jazz – my music of passion ! In 2004 we added Malcolm  on trumpet and vocal, and since June 19th that year have played at the Gold Coast’s premier jazz venue, The Basement at the local Arts Centre.  I also played Ballroom Dance music at Twin Towns Services Club from 1990 to 2017.

Since 2004 I have become a passionate Property Investor and  Internet  Marketer. 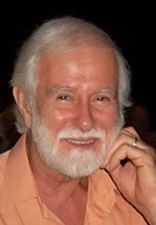